It might have been the week after Christmas but the Irish poker community was not going to miss out on the chance to celebrate the incredible first full year of the Irish Poker Tour at the Final in Dublin’s Green Isle Hotel. The wildly ambitious guarantees of €100,000 for the Final itself and €40,000 for the one-day Dublin Cup were smashed by our loyal customers who created and enjoyed the traditional fun and friendly atmosphere that is always associated with Irish Tour events. 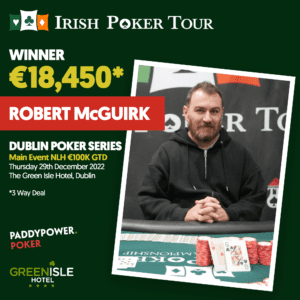 James had had an incredible run to the Final Table and arrived with over 9 million chips out of a chip total of 26 million; he was the only player with above average stack when we reached the last nine but then the cards ran dry and Paul and Robert grappled their way back into contention before the final ICM based deal. 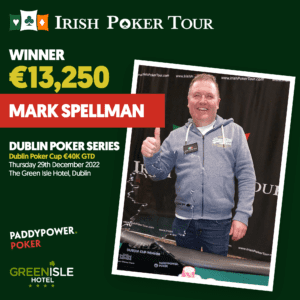 The Dublin Cup had 235 entries and a €51,700 pool. Old stagers Mark (Aren’t You Great) Spelman and Big Mick G discussed business as the morning was approaching. Eventually, Mark came out on top & scooped the €13,250 1st place.

The Irish Poker Tour & partners Paddy Power Poker wishes all its players a very happy and prosperous New Year. We would particularly like to thank the Dublin Poker public that have supported us brilliantly throughout 2022 and we hope will continue to do so in 2023. We have some crazy and exciting new ideas which we expect will help the Tour to grow even more in the future. Keep track of developments on irishpokertour.com.

Also, we would like to emphasise our thanks to all the players from the North of Ireland who have traveled down in great and growing numbers to support our events. Watch out for interesting Northern news in the next few days.