One of the most important positions at the poker table is the big blind. It’s vital that you master defending your blind, with the right ranges. Defend too wide and you’ll find yourself in too many tricky spots post-flop with a weak hand, like bottom pair. Defend too tight and you’ll just blind down too much (and players who notice your tightness will open even wider into your big blind).

In this article, I’ll look at the types of hands you should be defending, whether you should raise (three-bet) or just call, and why.

Before we get into that, one very important concept to understand is that how wide your defending range should be, and how much of it you should raise, depends entirely on the opening range of the opener, and not on their position. Obviously, players opening from early position should have a tighter range than players opening from the button, but this is not always the case. A maniac might open looser from mid position than a nit from the button. In both cases, your defending range depends on what you think their opening range is, not their position.

In all of the following examples, I’ll look at what we should be defending 100 big blinds deep against an opener opening an optimal range from a given seat. In all cases, I’ll say how many hands we expect this optimal range to be (for example, 16.5% from early position). That’s the key piece of information: if someone is opening from a later seat but they’re a nit only opening 16.5% then we defend the same range from the big blind. Conversely, if a maniac is opening 56% of hands (a normal button opening range) from early position, we defend the same range as we would against a player opening that range on the button.

So let’s get stuck in. In the first example, an opponent playing optimally opens 16.5% from early position. Here’s the range we defend: 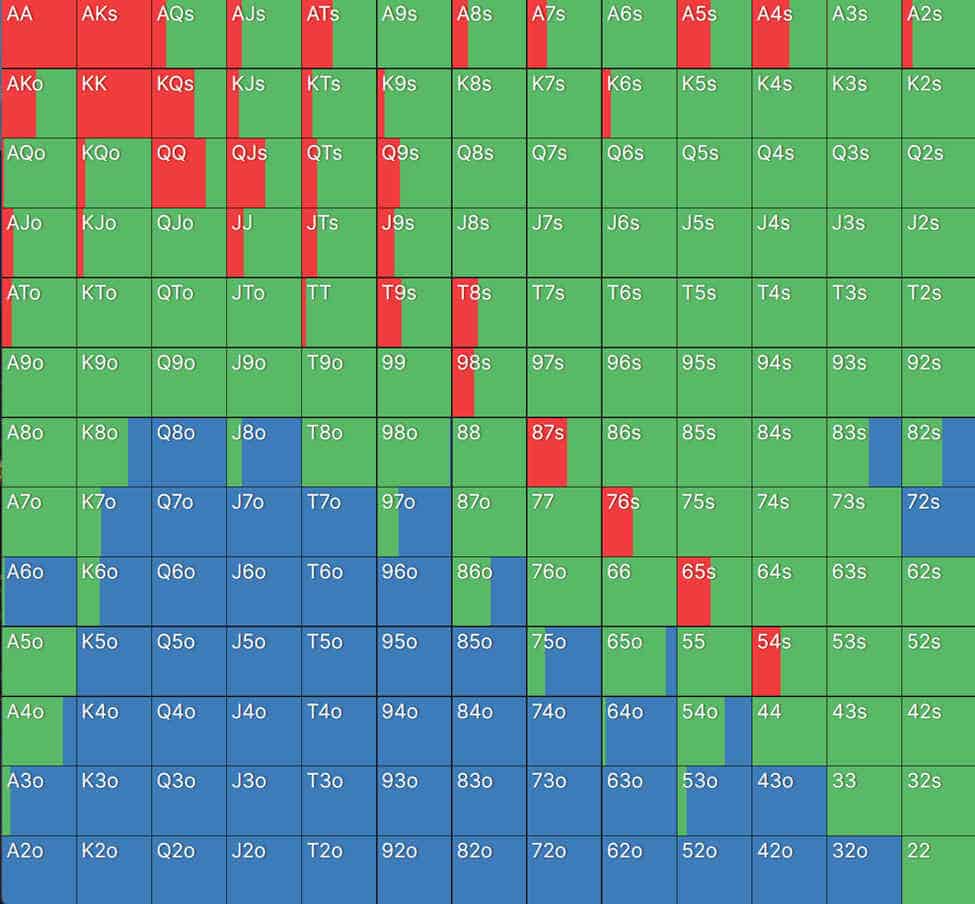 In this grid, red means raise (to 11.5 bbs), green means call, and blue means fold. Some boxes mix two colours, meaning if we are playing optimally we sometimes take one option and sometimes another. For example, with AQs we raise 11.5% of the time and call 88.5%. The main reason for this mixing, in theory, is board coverage which I explained in a recent article (and at length in a whole chapter of my latest book “GTO poker Simplified”): in practice it means it doesn’t matter too much whether you raise or call with AQs in any given hand (both options have the same expected value, meaning we will make the same amount of chips in the long run whether we call or raise this hand).

Similarly, 82s mixes green and blue, meaning we call sometimes (54%), fold sometimes. In this case, it means the hand is a breakeven call, so it makes the same as a call or fold (zero). The reasons for mixing are again board coverage, and also to keep our frequencies correct (meaning if we always fold this hand and others like it we are folding too often and opponents can exploit us by opening wider, but if we always call with this type of hand we have too many weak hands in our range and opponents can exploit this after the flop).

So let’s look at the range itself. Some key points:
1. We mostly call and don’t raise much. This is because we are up against a very strong range (the top 16.5% of hands) so we need a very strong hand to raise for value (AA, KK, AKs all the time, the hands just below that some of the time). Hands just weaker than that like 99 aren’t strong enough: if we do raise them and get raised (four-bet) we are in a horrible spot choosing between either calling with a hand that isn’t strong enough to happily call the raise or folding a hand that feels far too strong to fold. So we can avoid this spot by just calling that type of hand. The one big advantage the big blind has is that facing a single raise, they can close the action, call, and guarantee to see the flop. Use that advantage wisely, particularly against tight opening ranges
2. For these reasons, we call most of our hands we want to play, guaranteeing we get to see the flop. We call a much wider range than most people would imagine (including me until a few years ago). We favour suited cards: in fact, we defend almost everything suited over hands like A6o, for the same reasons I explained in previous articles (board coverage and they can continue on more flops).
3. We can’t just raise our strongest hands for value: that would make it very easy for our opponents to play against us before and after the flop. We round out our raising hands by raising the strongest suited connectors some of the time, as well as some of the weaker suited aces and some of the weaker unsuited broadways. These are all hands we can happily fold to a reraise, but play okay if we get flatted.

A final point is how we size our raises. Because we are out of position, we don’t want to make the mistake of making a small raise which our in-position opponent can comfortably call. Stick in a decent pot-sized raise to put them under pressure to fold more, or pay more to continue.

OK now let’s look at what changes when we put the opener on a wider range. An optimal opening range 100 blinds deep from the hijack is the top 28% of hands. Against that range, this is the optimal response from the big blind. 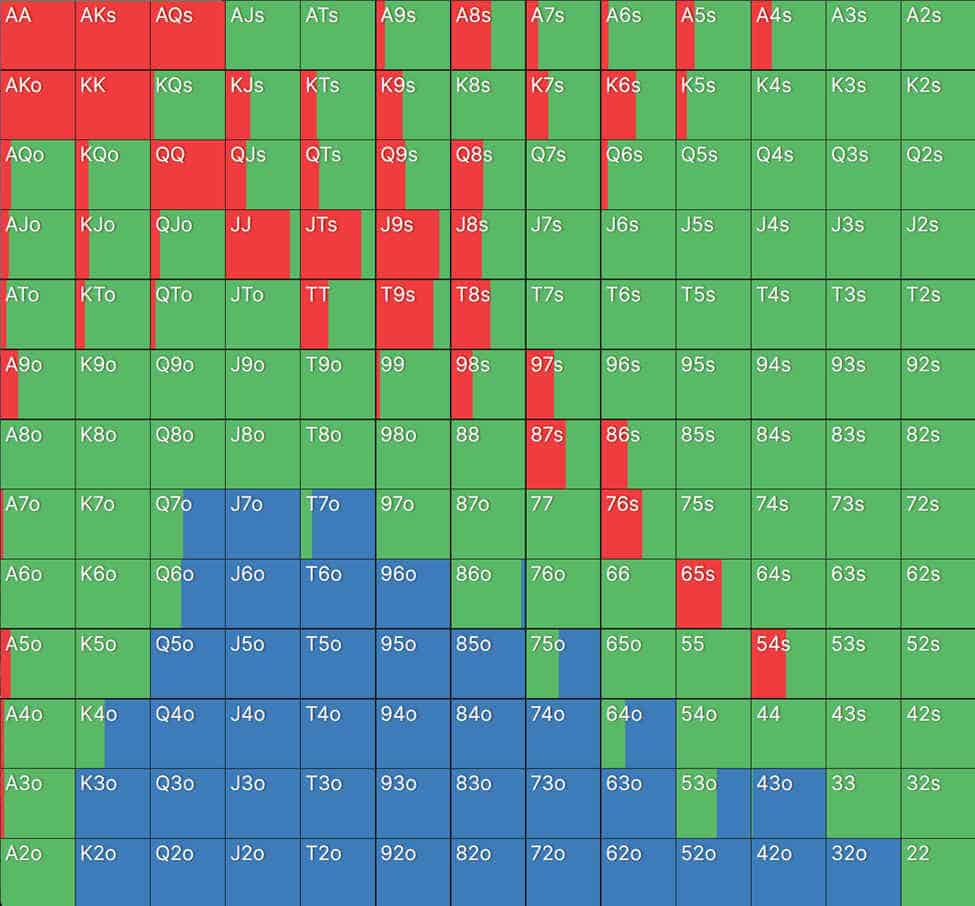 If we compare this to the earlier range, you’ll see that we are defending more hands, and raising more, both for value and as a bluff. Our value raises have expanded down a touch, though maybe not as much as you might expect. Now we are raising queens all the time, jacks nearly all the time, and tens more often. AQs is now strong enough to raise for value.

In tandem with this, our light three-bet range (bluff raises) has expanded in both directions. We are now raising hands like J9s more often, more weaker suited aces, and suited kings. But we don’t go too crazy with the weaker suited connectors.

Our calling range also expands. Some hands like KQs become much more valuable as calls so we no longer raise them ever as a bluff, we can now call everything suited, all our unsuited aces and most unsuited kings. Other than that, the unsuited portion of the calling range doesn’t expand much.
Now let’s move to the button, where an optimal opponent will be opening 56% of hands. Against this much wider range, we obviously defend wider. This is the optimal big blind defending range: 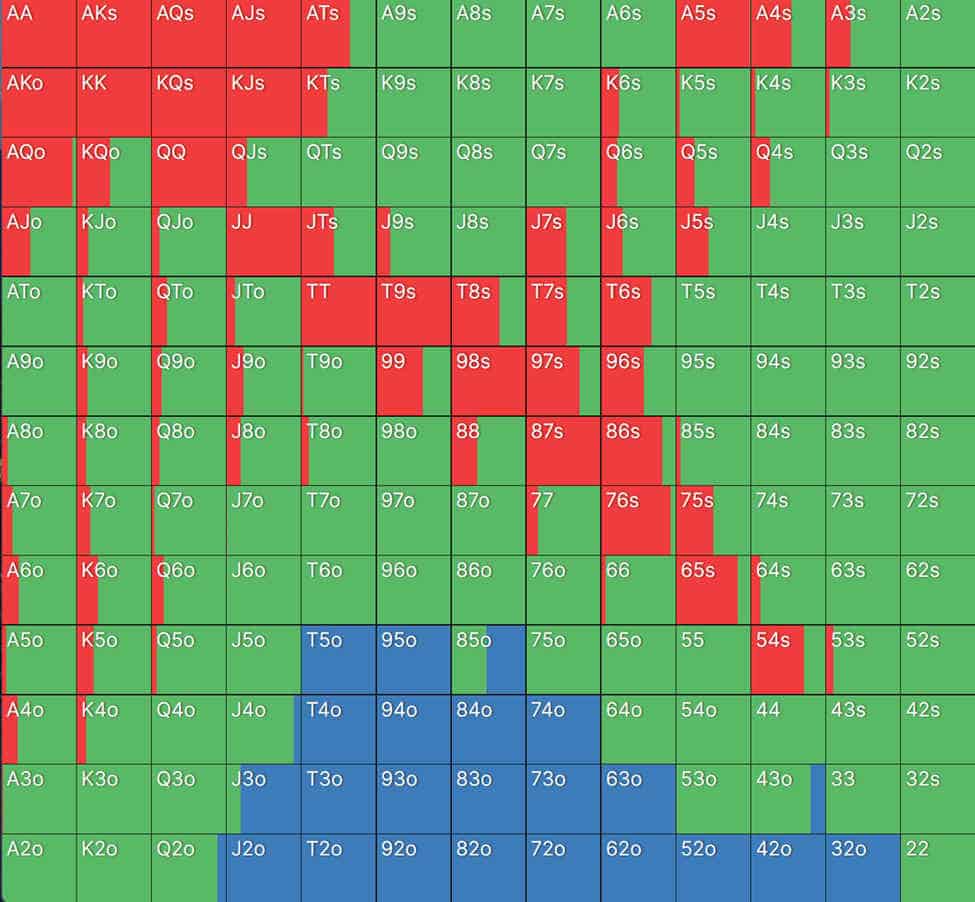 As expected, we are defending more hands, and raising more, both for value and as a bluff. Our value raises have expanded down quite a lot. Now a hand like KQs which is raised sometimes as a bluff against a tight early position open and falls into the “too strong to bluff with but not strong enough to raise for value” against a hijack open is actually strong enough to raise for value, so we go ahead and raise it all the time.

In tandem with this, our light three-bet range has expanded again. We are now raising hands like T9s down to 65s more often, more weaker suited queens, and suited jacks. We are also three betting weak unsuited hands like K6o that we don’t mind folding to a raise even from the button. But we still don’t go too crazy with the weaker suited connectors.

Our calling range also expands. As with KQs in the last example against a hijack open, some hands such as middling suited aces, QTs and A9o become much more valuable as calls so we no longer raise them ever as a bluff. Our unsuited calling range expands a little but not as much as you might expect: we are still folding hands like K3o, J7o, and 43o.

All the examples in this article assume that the open is to 2.3 big blinds, and the effective stack is 100 big blinds. Opening and defending ranges are sensitive to both these factors (open size and stack depth). The bigger the opening size the tighter the ranges should be (both opening and defending). So don’t use these charts if someone opens to 3 big blinds: you should fold a lot of the weaker hands because you’re getting a worse price to defend, and the opening range is tighter.

As stacks get shallower, the hands we defend and the ones we raise rather than call also change. This is something I’ll come back to in future articles, but if you’re impatient you can look at defending ranges at different stack depths in tools like GTOWizard.

In my next article, I’ll move on to start looking at how to play on the flop, but before I sign off I want to tell you a little about my latest book with Barry Carter, “GTO Poker Simplified”. This goes into a lot more detail and complexity at the topics I’m covering in these pieces, so if you are finding these articles a bit too straightforward and would like more complexity and detail, I strongly recommend buying the book on Amazon or the other places it’s available. If on the other hand, you are finding these articles tough enough, maybe wait until you’ve assimilated them and I’ve written a few more before buying the book.