Opening the Pot in Mid and Late Position

In my last article, I gave a theoretically correct range of hands to open in early position when you and the players behind have 100 big blinds.

I also explained why the range is constructed in this way, and what problems can arise if you diverge too much from these recommendations. I also said that in later position we should be opening more hands, so in this article, I’m going to move on to look at middle position (specifically the seat four before the button, often referred to as the LoJack) and late position (specifically on the button).

Let’s start with the LoJack. Here’s the range: 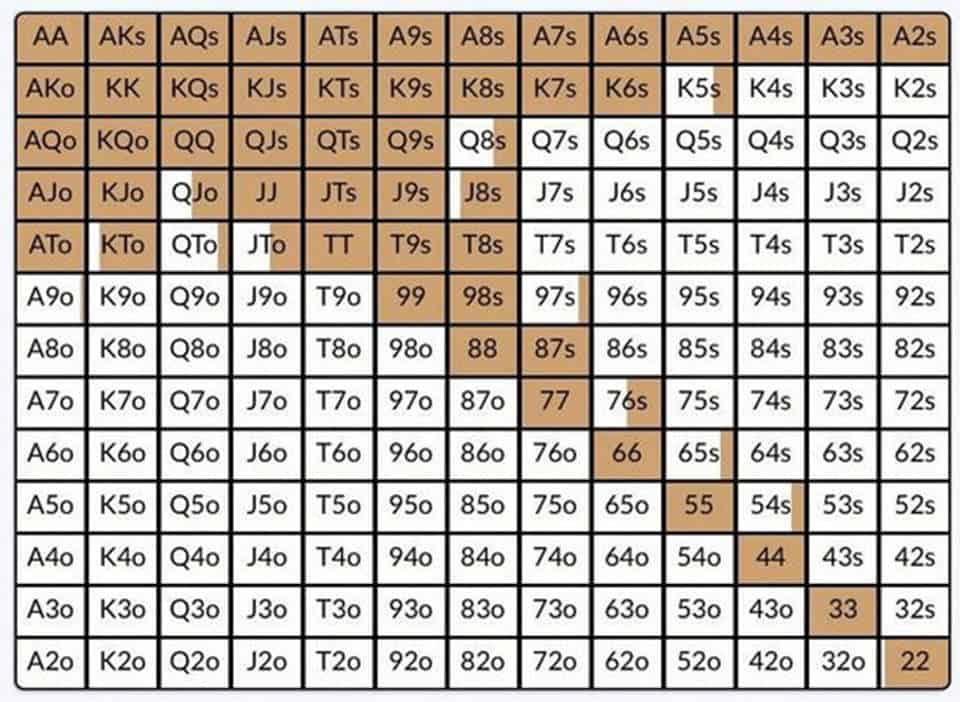 How does this differ from the early position range? Obviously it’s wider, but how exactly? There are a few things to notice.

There are three major hand classes: pairs, suited hands, and unsuited hands. We open more of all three classes in the LoJack compared to earlier, but not in equal proportion. The hand class we open proportionally more hands are suited: we add roughly four more suited kings, one more suited queen, jack, ten, and nine.

We add a couple of suited connectors like 87s, but when I show this chart to students the two things that surprise them the most are why we add far more suited kings than lower-suited connectors. The reason for this is twofold.

First, board coverage. I explained in my last article how important it is to have hands that cover all possible flops in our opening range, and that the easiest way to do this is by including all (or almost all) the suited aces. Once we have all the suited aces as we have in this LoJack range, the next place to look is suited kings.

The reason a suited king like K6s is better than, say, 65s, is because at this stack depth with a lot of chips behind, drawing to the nuts (a hand that will be the nuts if you make it) is very important. If you make the nut flush you can happily pile all your chips in, but if you just have the 6 high flush you have to worry about running into a bigger flush.

Other much less important reasons why we prefer K6s to 65s is that the King blocks very strong hands making it less likely somebody yet to act has something like KK, AK or KQ that beats us, and K6s will make top pair a lot more often than 65s.

Comparing the LoJack range to the early position one you’ll see that by the time we get to the LoJack we are happy to open all the pairs. In my last piece, I explained why the small pairs are not good opens in early position: primarily because they’ll run into a bigger pair behind more often. The chance any player is dealt a pair is roughly 6%, so if we have 8 players behind us and we get dealt pocket twos, we will run into a bigger pair almost half the time.

By contrast, in the LoJack with only five players behind, we will have the best hand right now over 70% of the time with pocket twos, so can go ahead and open it more confidently.

Finally, you see that while we do add a few unsuited high card hands to our range, this is the portion of the grid that expands the least. The reasons for this are the same as those I explained last time for why we don’t want to open them from early position: they just don’t flop as well as their suited cousins, and even with only 5 players behind, we still have to worry about being dominated.

Ok now let’s move all the way around to the button. Here’s the range: 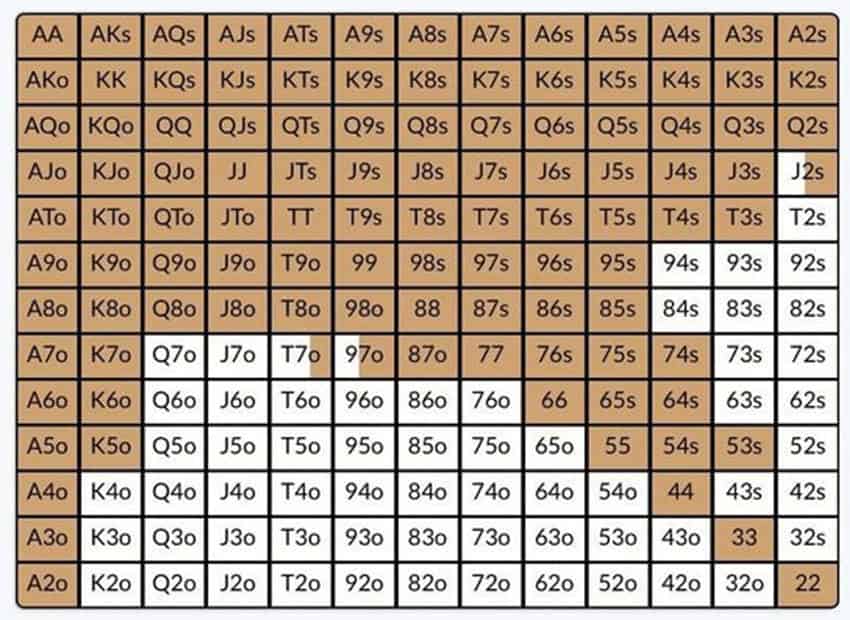 As I’ve said before the button is by far the best seat. No matter who else is in the hand we will be in position, on every street. Additionally, when it’s folded around to us on the button, we have only two players left to worry about, one of whom is in such a bad position he’s going to fold most of the time even if he knows we are opening super wide. These two factors combined mean we can open super wide, over half the time.

This range actually represents just over 53% of hands. That number might surprise you, as looking at the grid it looks like we are opening way more than half the time. The reason for this is the London Underground map comparison I made last time. Unsuited hands are three times more common than their suited cousins, so that “half” of the grid under the diagonal of pairs is actually way more like three-quarters. So all the unsuited hands we don’t open are a bigger part of our overall range than they appear.

The first thing to notice on the button is just how many suited hands we open: almost all. We thumb up our noses only at the very worst ones.

By contrast, our standards for their unsuited cousins are a lot higher. We like all aces and most kings, even unsuited, because they’ll very often be the best hand right now and can win unimproved or uncontested. They also block strong hands, although this is much less of a factor when we have just the blinds to worry about.

But beyond that, if our hand isn’t suited, we pretty much want two cards that are higher than a 7, or are connected or both.

What all of these hands have in common is the ability to make very strong hands like straights a small amount of the time, and top pair with a decent kicker much more of the time, neither of which can be said for a hand like 82o, or even Q2o. So stay away from these hands unless the blinds are so weak you think you can open everything.

Opening the Pot in Mid and Late Position

Introduction & The Importance of Position